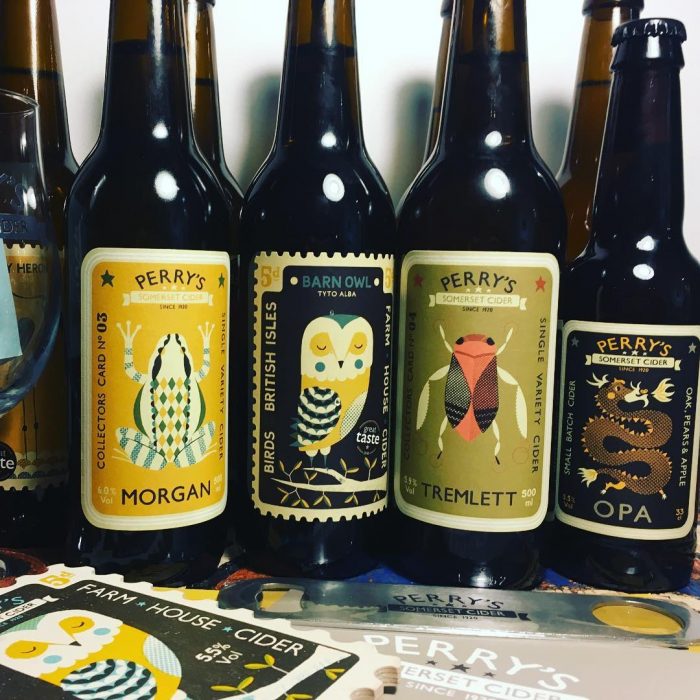 Perry’s Cider produce award-winning cider from their farmhouse based in Ilminster, Somerset. Founder, William Churchill, started the business in 1920 as a sideline to his Blacksmith’s, which is now the company office.  Since then, they’ve grown into a fiercely independent pioneer in the UK’s craft cider revolution.

Yes, craft cider is a thing now.  We grew up as cider drinkers before craft beer existed, opting for cheap dry cider because it was the least worst option available as skint students back in the day.  Thankfully, we’ve moved on since then – and so has the cider industry – so we were really excited to taste test Perry’s Ciders.  A big thank you to them for sending us a selection of different bottles to sample.

The first thing that struck us about Perry’s Cider range is the awesome branding.  We really love the clean, crisp, postage-stamp style aesthetic.  Not only is it eye-catching but it has that farmhouse, country kitchen chic thing going on with the colours and the animal theme.  They’ve nailed the branding but what about the cider?

Craft beer came along and cider became one of those things we reminisced about from our teens, alongside Panini sticker albums, Napster and the Crystal Maze.  Perry’s is a million miles away from the cider we used to drink – it’s sweet, it’s incredibly easy to drink and most importantly, it actually tastes like apples!

OPA is a small batch cider made with apples and pear juice, aged in oak barrels.  It was one of our favourites – a strong oak aroma before the apples and pears (not stairs) shine.

Another highlight for us was Vintage, part of Perry’s core range – matured in barrels for 12 months and has a real deep apple flavour with a subtle hint of vanilla.  The pick of the bunch for us was Morgan – a super sweet sparkling apple cider where the quality of the apples really shines through.

One thing we noticed throughout the range we tried was that the ciders are generally very sweet, very much taste of apple (a good sign for a cider, right?) and all have a distinctive farmhouse funk from the wild yeast.  These ciders taste authentic, fresh and you can tell they’ve been made organically in the countryside.

Perry’s make their cider as naturally as possible while refusing to add weird flavours or additives; fermented using only Somerset apples, small batch techniques and 100% juice on their farm.  If you love cider, we firmly recommend them – and if you’re a lapsed cider-drinker turned craft-beer fan like us, Perry’s may just open your eyes to the world of craft cider.