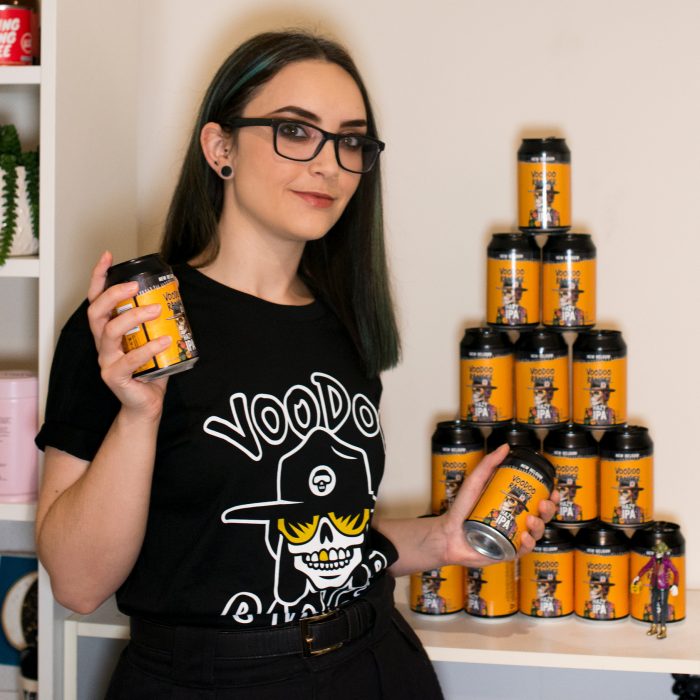 We used to love going to rock nights, punk gigs, hanging out with friends and sharing beers… then 2020 happened.  A year where bars, pubs, clubs and gigs became a distant memory.

As someone who’s been living alone and working from home for almost a year now, Twitch has been a revelation. Most people think of Twitch as a place to watch hardcore gamers flex their kill/death ratios or whatever, but there’s so much more to it.  You can find people just chatting, singing, dancing, exercising… you name it, someone’s probably doing it live on Twitch.

One weekend last year we randomly found Gemma DJ-ing her regular Saturday rock night on Twitch and it brought so many memories flooding back of how we used to spend weekends in ‘real life’.  She’s also built up a really friendly and inclusive community in the chat.  The social interaction, good vibes and banging tunes have gone a long way towards keeping us sane during lockdown.

Gemma was also sponsored by Voodoo Ranger as part of their UK launch, so we thought it’d be cool to have a chat about beers, music, pizza and her trusty sidekick, Bub – and she kindly agreed!

For those who don’t know you – can you tell us a little about yourself and what you did before the apocalypse?

My name’s Gemma and before the apocalypse I was a freelance DJ!  I specialise in rock and alternative music but I love a good pop night, too!  For obvious reasons I haven’t worked since March and was recommended by a friend to try streaming on Twitch which I instantly fell in love with and have been doing ever since.  I also work at a small local animal rescue twice a week looking after the cats there.

We stumbled across your live streams on Twitch and found you DJ-ing some pop-punk classics – how did you get into Twitch?

One of my best friends is a partnered Twitch streamer full-time, but I never really understood what that was or meant.  Her name is Ruby True and her streams are the complete opposite of mine, day time ASMR to calm and relax whilst I’m blaring out rock nights every Saturday!

Emo and pop-punk throwbacks are my jam and I’ve loved sharing that with my new audience on Twitch.  Before, I mostly DJ’d student nights and a younger crowd, so being 30 this year, they don’t necessarily want to hear the lesser-known throwbacks that I love – thankfully my audience on Twitch is, in general, my age and above so I’m really in my element there.

And you recently became a Twitch partner, right? Congrats! Does that mean that Twitch streams will continue if/when the world goes back to normal?

Yes!  After a very long wait from application, I was absolutely stunned to receive the email offering me the partnership. It’s amazing recognition and something I’m really proud of.  I’ve been streaming at least three nights a week (including every single Friday and Saturday!) for the last ten months and it’s something I’ve been planning to stick with since very early on, so I’ll definitely still be there once the world returns to normal – hopefully I’ll also return to some of my previous jobs, too!

Before March, I’d never been on the Twitch website and had no idea how varied the content there is – there’s so many amazing musicians, comedians, artists and much more than just competitive gaming.  It really is an amazing place.

One of our favourite parts of the stream – apart from the awesome music – is Bub.  Can you tell us a bit about him?

Bub is an absolute legend and everyone’s favourite part of the stream – he even has his own perch, camera and lighting, haha!  Originally I was fostering him from the rescue when I was volunteering, I’d fallen in love with him instantly (and him me I think) and he wasn’t getting on being mixed with the other cats there so I took him home.

I’m usually allergic to animals but for some reason I have very little reaction to him which is amazing – he’s an angel!  We actually just had a birthday party for him on stream to celebrate his fourth birthday and everyone loves when he comes to visit us, he’s totally spoilt and likes to spend a good portion of the day chilling out in his own teepee!

Voodoo Ranger recently launched in the UK and we spotted you doing some sponsored streams for them, how did that come about and what’d you think of the beer?

I absolutely love the guys over at Voodoo Ranger.  I believe a member of staff had been enjoying my streams by coincidence and decided to reach out, I was a little dubious at first because I don’t generally like beer but over the summer I was really getting into a couple of Hazy IPAs after trying them for the first time and it just so happened to be a Hazy IPA that they were launching!

I was honest about that from the get go, as obviously I wouldn’t be able to promote something I didn’t like but luckily for me I loved it!  It’s definitely my favourite beer to drink – it was hard to keep myself from drinking them all before the live stream launch.

It’s so nice as a self-employed person to receive gifts like this congratulating you on an achievement – Twitch Partner beers!

Because there’s no salary rise, job title, new office…we don’t celebrate stuff like this the same as a normal promotion, so thank you @voodooranger ✌🏻 pic.twitter.com/ZyUryLsq6d

So have you been converted to the beer world now? What are your favourites?

I didn’t think I was a beer fan at all but I really love the Voodoo Ranger Hazy IPA!  Locally, I tend to go for Big Wave if I can as I really like that one too, or Brewdog’s Hazy Jane.  Otherwise, I’ll occasionally drink beers like Asahi or Peroni – or even a pint of Guinness on occasion!

Do you have any local bars or breweries you’d recommend once we’re allowed to go back to the pub again?

I’m quite fussy and like to drink what I like rather than just what’s there; thankfully we have loads of choice in Southampton to whittle down places to go!

My absolute favourite being a small, local alternative bar called Beards and Boards.  They often have Big Wave on tap and even do takeaway pint cans which has been a nice treat during the last year when we’ve been unable to visit pubs.  They stock different beers all the time and have their own canning machine which is really cool!  Plus, they play all the music I love which is a bonus. They have been great during the pandemic, as well as being super friendly.

There’s another place called Overdraft that also serve amazing tacos, they’ve been doing delivery with some lovely beers they made partnered with Unity Brewing Co – my favourite was a Golden Ale called Stylus.

How about pizza – what’s your usual order?

I love a good margherita pizza!  Artichokes are also great and I like most vegetable toppings, as long as it’s not olives.

I don’t really eat cheese any more and vegan cheese doesn’t always match up (they are getting there, though) so I have pizza a lot less than I would like but I actually just had pizza this weekend, it was my first Domino’s in probably ten years!

It was surprisingly nice, but usually I love something a little more rustic – stone-baked or wood-fired sourdough – yum!

Purezza is the best pizza in the whole world, but locally we have loads of great indie options too.  Smokeys Pizza and Popsi’s both do great vegan options as well as the usual and we also have a Franco Manca here which is top-tier for me!  Most pizza is good pizza though isn’t it?!

2020 was a shitshow of a year – were there any highlights for you?

2020 was definitely a huge shitshow in many ways but I was lucky to have many highlights.  Adopting Bub is one of course, but starting my Twitch journey has also been a huge highlight.  Not just the streams themselves but the community that has been built around it is absolutely phenomenal and something I’ve not really found anywhere else online or in real life.

Whilst some of my audience use the stream as a way to replace the club nights they are missing, for many it is completely new.  They might not have even had a local rock club, the money, confidence or time to attend, or maybe not have any friends with the same interests.  With the vast amount of difficulties over the last year, we’ve become really close whilst supporting each other.  We’ve also raised thousands for charity over the last year which is really humbling.

What can we expect in 2021?  Do you have any goals or resolutions?

I don’t have any specific goals or resolutions – some ‘long-term’ goals I had were to make Twitch Partner and grow my Twitch enough that I would be able to be a full-time streamer which got ticked off within only a few days of the year!

I want to continue growing my channel, upgrading my set-up and content the best I can – there’s so much to learn and the technology and creative side is something that hasn’t come natural to me, I have to work really hard with that.  I’m also looking forward to getting back to some kind of fitness routine whenever that may be.

You can find Gemma streaming over on Twitch.tv/itsGemmaEdwards – Friday nights are usually themed DJ sets (pop, emo, 80s, etc), Saturday night is rock night and Monday evenings are for chatting.  Pop in and join the community.  If you’ve got Amazon Prime, you can subscribe for free and support the stream too.