It’s WrestleMania weekend! What better time to look back at some of our favourite wrestling themed craft beers from the last few years? Some of these beers are still available but most were one-off brews that have since retired.  As such, you can consider this our Hall of Fame of wrestling beers…

We couldn’t start with anything else, could we? It’s Stone Cold Steve Austin’s very own craft beer! He may be most commonly associated with downing Steveweisers during the Attitude Era but you may have noticed him sharing a few of his very own IPAs with Becky Lynch on a recent episode of WWE Raw.

A one-off brett-fermented pale ale brewed for Manchester Beer Week 2017. Lightly tart with a dry finish to complete the subtle zesty character. A homage to the best there is, the best there was, and the best there ever will be. Brace yourselves, more puns incoming…

A hoppy pale ale with mango additions & the first of a number of beers from Top Rope Brewing – a brewery who’ve made it their mission to make as many wrestling pun beer names as possible. If you’re looking for some beer inspiration for WrestleMania weekend – check out the Top Rope Brewing blog for Beer and PPV pairing recommendations.

Time for a Papa Mango I think 🤔 pic.twitter.com/n5M6StSQtu

Brewed in collaboration with Brew York (more from them later!) – Milk Foley was a sweet pale ale with strawberries and cream.  A refreshing milkshake for Mankind.

Mick Foley actually spotted and acknowledged this one on Twitter – how cool is that?!

JUST FOUND OUT I have a beer named after me! Thanks @TurningPointbco
Drink responsibly, and don’t drink and drive – but enjoy the heck out of #MilkFoley https://t.co/Xod2SQI0ec

Alright, wrong PPV for WrestleMania weekend but this is a recent release from Siren Brew Co which is still available from assorted retailers. It’s a rhubarb crumble sour that absolutely nails the flavours.

I’m literally drinking it right now while writing this list. Seriously. I picked it up from Honest Brew.

If you’ve never ordered from Honest Brew, you can use my referral code (REFEF11ZV98FH) for £10 off your first order (min spend £29).

Oh yeahhh! Returning the favour from earlier, this was a collaboration with Turning Point & it’s the other half of the wrestling tag team, The Cheaty Lactose Twins’ with Milk Foley.

So, it turns out that those cans of 12.8% Stay Puft are a mere session beer… Now on tap…

This might well be our favourite can artwork of all-time. Taking inspiration from the classic wrestling era of the 80s and 90s combined with some heroes of the North of England – Brian Blessed as the Ultimate Warrior, the Chuckle Brothers as the Legion of Doom and Ken Dodd as Bret Hart to name a few.

The can art (by Ben Mather, graphic designer & illustrator from Wigan) is as bonkers and brilliant as the crazy world of professional wrestling itself. It was a great beer too – a DDH milk sugar IPA – in case you were wondering about what was actually in the can… 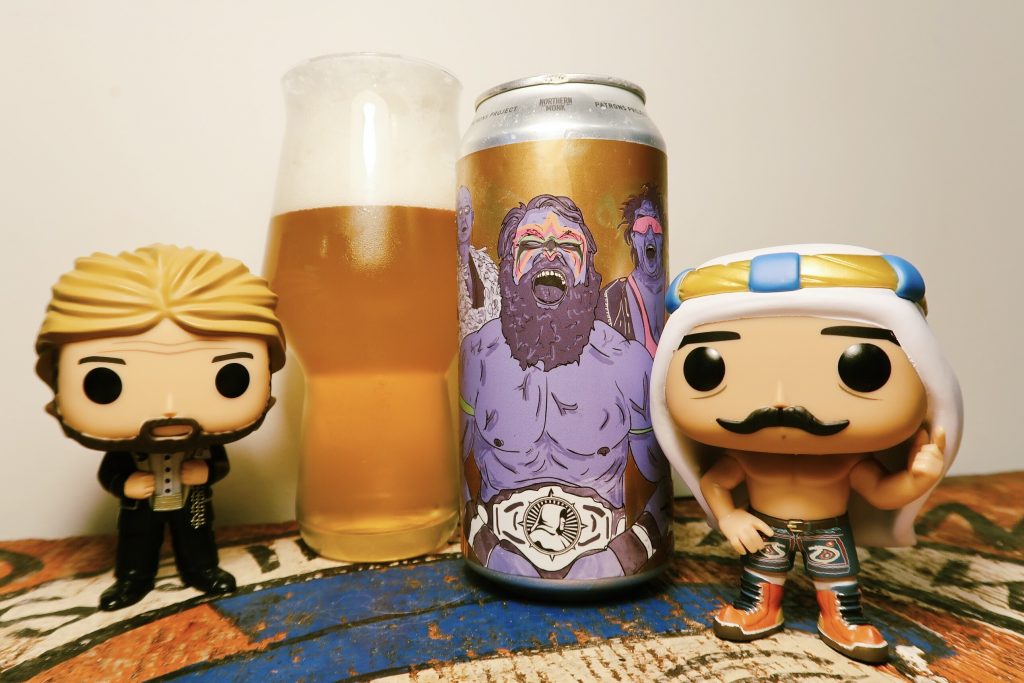 This Danish micro-brewery have been making some great beers recently, popping up more and more frequently in the UK. We actually have no idea if this beer is named after the wrestler, Doink, but we like to think it is.

Big Doink is an 8% DIPA. Our one wish is that they make a lower ABV version and call it Dink…

Inspired by Hulk Hogan’s best mate, Brutus – the most unconventional of 80s barbers – this cleverly named Brut IPA from Gothenburg, Sweden’s Beerbliotek was their attempt to put a sleeper hold on more popular NEIPAs at the time.

Sadly for them, Brut IPA’s seem to have faded quickly – they didn’t make the cut.

Another beer from this wrestling-themed brewery – this time it’s a porter brewed with Natural Process cold brewed Ethiopian Coffee (Roasted by Neighborhood Coffee, Liverpool).  Named after one of the all-time greats, Rowdy Roddy Piper.

11. Against The Grain – Hacksaaz Jim Chuggin’

The second installment in Against the Grain’s Greats of Wrestling series, HackSaaz Jim Chuggin’ was a pilsner that used Saaz hops to smack you in the face like a 2×4”.  This might be our favourite wrestling beer name on this entire list.

By the way, there was another beer in this series from Against the Grain called Raucho Man Randy Beverage – a rauch beer.

Another slightly more subtle nod to wrestling from Siren than some of the other blatant puns in this list.  This one is a hearty red ale made with seven different malts, fit for a demon.  We can imagine Kane-ing a few of these during WrestleMania weekend….

Here’s a beer that shares a name with a British wrestling legend brewed by Manchester’s Track (in collaboration with Kings & Daughters Brewery).

Giant Haystacks was best known for his long-running feud with Big Daddy in the 70s and 80s.  Two absolute behemoths, so it’s fitting that this is a huge beer – a 13% ABV Coffee & Blueberry Granola Imperial Stout made with blueberry, vanilla, coffee, cinnamon, cocoa nibs and lactose.

A collaboration between New York’s Barrier and Other Half, which looks to us like a nod to the Million Dollar Man, Ted Dibiase.  According to Barrier’s FB post when this beer was released “…no expense was spared in the making of this masterpiece…. Over one million dollars worth of hops were used…”

A hazy IPA, dry hopped with Hallertau Blanc and Amarillo and conditioned on sour cherry puree.  A pile-driving beer fit for a king, you might say – and yes, yet another from Top Rope Brewing – this time in collaboration with Whitley Bay’s Black Storm Brewing.

Would you just look at this?? All the gold surrounding The King, just like he deserves! New cans of our Collab, Cherry "The King" Lawler, with @blackstormbrew arriving soon and they won't last long like the last batch! Want some? Contact [email protected] pic.twitter.com/ofhFrbFe5N

If you watched WWE in the Attitude Era, you’ll know one of the finest sights on Monday Night Raw was seeing Stone Cold Steve Austin open a metaphorical can of Whoop Ass.

Now, you can quite literally open a can of Whoop Ass – and drink it – it’s a tasty Berliner Weisse, the second beer on the list from Beerbliotek; this one brewed in collaboration with All In Brewing.

Another entry from Against The Grain – and another beer for Brutus! Fruitis The Farmer Beescake crams as many puns as possible into a beer name.  The beer itself was a barrel-aged honey and melon saison and was part of their All Funked Up series.

Try this Against the Grain All Funked Up Wild Saison – Fruitis the Farmer Beescake Melon Saison! #Saison #WildYeast pic.twitter.com/gvpD7P9ruJ

Welsh brewers, Tiny Rebel are here to lock in The Full Nelson.  This is their 4.8% Pale Ale brewed with Nelson Sauvin hops from New Zealand.  Are they big wrestling fans? Who knows – but we are – and we also happen to love NZ hops so congrats, Tiny Rebel, YOU MADE THE LIST.

In their own words, this beer is “surprisingly not named after the wresting legend” – instead it’s Hazy, Hoppy & Heavenly but given this is their third appearance on this list, not sure we’re buying it…

What’s your favourite wrestling themed beer? Do you know of any great wrestling pun beer name we’ve left out? What are you drinking this WrestleMania weekend?  Let us know in the comments below!