Taking place in Leeds from 18th-20th April 2019, some of the best brewers from around the world are bringing their hoppiest, juiciest brews for you!

END_OF_DOCUMENT_TOKEN_TO_BE_REPLACED

2018 was a good beer year for us – we visited countless taprooms and craft beer bars, attended festivals in various countries and tried a frankly ridiculous amount of new brews.

Putting together a list of the Top 10 is a frivolous task but humour us – beer is meant to be fun, and we’ve had some fun reminiscing over the best brews from the last twelve months – so let’s get stuck in.
END_OF_DOCUMENT_TOKEN_TO_BE_REPLACED

The full line-up of beers for Hop City 2018 has just been released by Northern Monk.  The festival is a celebration of hop forward beers from the best breweries worldwide and it takes places in Leeds City Centre over the Easter weekend (29th-31st March).

END_OF_DOCUMENT_TOKEN_TO_BE_REPLACED

If you asked us who make the best hop forward beers in the UK right now, three of the first names we’d come up with would be Northern Monk, Deya and Verdant. The three breweries have come together in collaboration to make this, Hop City DIPA, the second version of the beer known as Hop City released to coincide with the second annual, Hop City festival – a celebration of hop-led beers from some of the best brewers around the world.  The festival itself takes place in Leeds City Centre, 29th-31st March, but we’re here today to talk about the beer.

END_OF_DOCUMENT_TOKEN_TO_BE_REPLACED

Whiplash Celebrate One Year in... 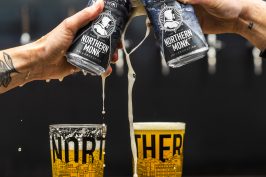