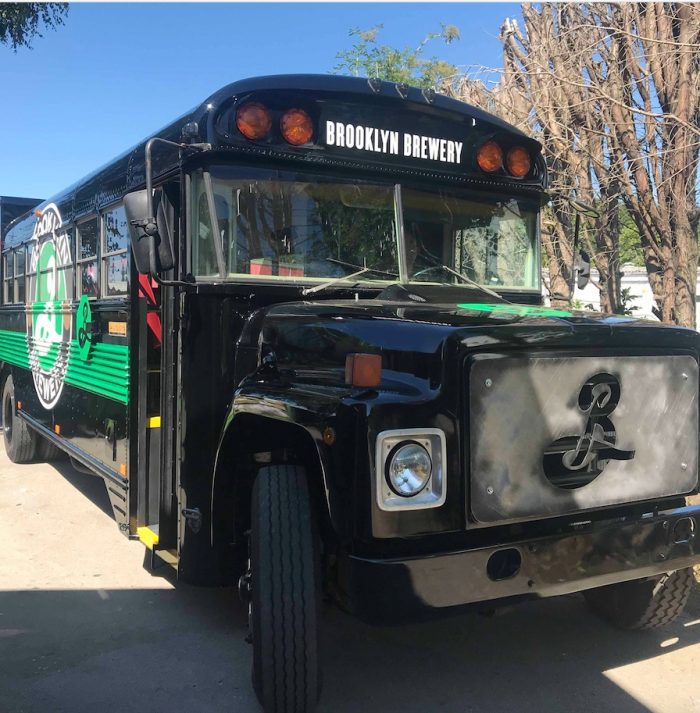 Brooklyn Brewery are currently ‘On Tour’ in the UK in their fully-kitted out, bad-ass beer-serving bus! They’ve already stopped off in Glasgow and the next stop is Canal Mill, Leeds.

We’ve got a lot of love for Brooklyn Brewery – Brooklyn Lager was one of the first craft beers I ever tried, and Brooklyn Brewery was the first brewery I ever visited, back in 2013.  So it’s nice that they’ve come to our side of the pond this time round.

Brooklyn Brewery’s pitstop in Leeds sees them collaborate with indian street food legends, Bundobust, DJ Lucy Locket and street-artist Nicholas Dixon to host a highly creative, beer-fuelled party. It’s free entry so come along for a good time with great music, great art and great food. The first 200 guests that arrive at Canal Mill will enjoy a free Brooklyn beer, so get there early!

To bring the space alive, Nicholas will be live painting a mural on Canal Mills’ walls.  His work can already be seen around Leeds having recently completed an 80ft mural inside Kirkgate market – and he’ll be creating a unique masterpiece exclusively for Brooklyn On Tour that will become a permanent feature at Canal Mills.

“Brooklyn Brewery has always been a proud supporter of food, art, music and community efforts and collaborating with creative characters and legendary independent venues like Canal Mills is what we enjoy most. We can’t wait to see what they come up with on 18th August.” – Chris Moore, Brooklyn Brewery Brand Ambassador

The Brooklyn Brewery tour bus is kitted out with a fully-functioning bar and space to seat up to 12 beer lovers.  It also has a serving hatch that will pop open to serve guests a range of brews including the classic Brooklyn Lager, Summer Ale, Scorcher IPA, Sorachi Ace and the new orange pale ale, Naranjito.  There will also be the chance to try some of the brewery’s limited-edition beers, rarely available in the UK.

If you can’t make it to the event in Leeds in 18th August, Brooklyn On Tour will also be hitting Birmingham on 1st September and Liverpool on 22nd September.