They said it would never happen.  That it would only be available on tap at select locations and they’d never bottle it.  Well, it seems like Russian River Brewing Co have had a change of heart.  They recently announced that Pliny the Younger would be bottled in 2020 for the first time ever.

Pliny the Younger is an annual release, usually brewed in February and available in super limited quantities on draught around the California area where the brewery is based in Santa Rosa.  It’s a Triple IPA which is incredibly sought after and near impossible to get your hands on unless you happen to be in the right place at the right time. END_OF_DOCUMENT_TOKEN_TO_BE_REPLACED

Pliny the Elder has long been the holy grail of craft beer, having been voted the Best Beer in America eight years in a row (2009-2016) by readers of Zymurgy magazine. It’s one of those beers we’d heard talked about, revered and casually name-dropped by other beer geeks, the way people happen to casually drop into conversation the time they met a celebrity. “Oh, I just happened to drop into this dive bar in LA to kill some time and there it was…”

END_OF_DOCUMENT_TOKEN_TO_BE_REPLACED

Pliny The Younger to be Bottle... 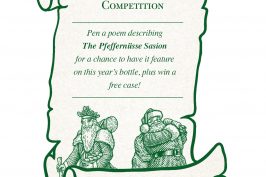 🍺 Craft & Slice 🍕
@craftandslice
RT @craftandslice: Pretty cool to see @HonestBrew now stocking Hop Hooligans beers all the way from Romania! We did an interview a while ag…

Pretty cool to see @HonestBrew now stocking Hop Hooligans beers all the way from Romania! We did an interview a whi… https://t.co/M8wXwxnzti

RT @cloudwaterbrew: Sometimes history is wrong. Sometimes the best ideas are the ones you didn’t want to have. Imperial Haison, on tap here…