Lightyear are a seven-piece ska-punk band known for their chaotic live shows and feel good vibes; a  punk rock party band.  They released two albums on Household Name Records between 2001-2003 before splitting up shortly afterwards, having toured intensely during that time.

In just a few short years, they managed to get kicked off the Jackass tour, sneak on stage with Ice T dressed as a pantomime horse and play Reading and Leeds festival multiple times including a gig in the campsite with a PA & generator.  It’s also worth noting that they were dressed as ninjas for that campsite gig and they played after Metallica finished, so technically, they headlined the festival. END_OF_DOCUMENT_TOKEN_TO_BE_REPLACED 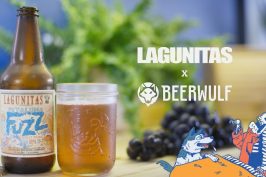 Can you get coronavirus from C...

Pliny The Younger to be Bottle...

Looking for a unique #PancakeDay recipe? How about pizza pancakes?! 🍕 #PancakeTuesday #PancakeDay2020 https://t.co/fFVXrM88Vb