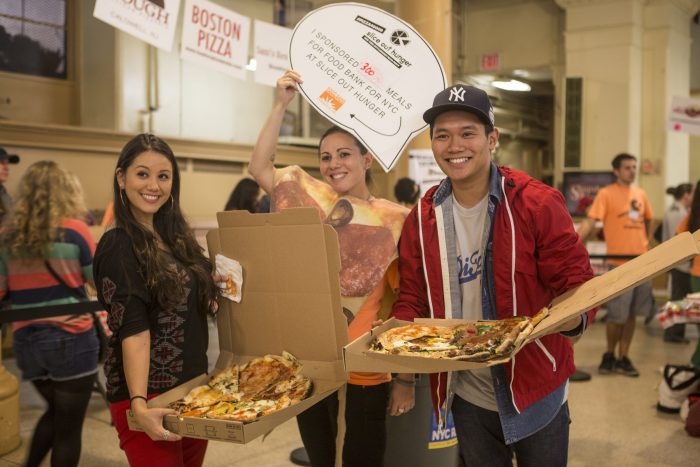 Slice Out Hunger is a community of pizza lovers who’ve raised more than $250,000 to fund hunger relief efforts around the US since 2009.  Food donated by independent pizzerias has allowed them to raise that money.

Their first pizza party featured about fifty pizzas from half a dozen pizzerias in NYC and raised about $500.  Fast-forward to their last major event – they raised $50,000 in just three hours, featuring 1,500 pizzas from over 50 of the best pizzerias in New York City.

The annual event is now a NYC institution getting bigger ever year, with independent pizzerias supporting the community and raising money for local food banks with proven track records.

Slice Out Hunger was founded by Scott Weiner from Scott’s Pizza Tours.  We took one of Scott’s tours in 2013 and had a great time finding out all about the history of pizza in NYC – as one of the most knowledgeable people in the world of pizza, Slice Out Hunger is in safe hands.

For more info, check out the website here – and if you’re in New York today – go eat some awesome pizza.

You never need an excuse to eat pizza, but when you’re raising money for charity? Treat yourself to an extra slice or two.