We recently interviewed Padraig Fox from the Open Gate Brewery and he kindly offered us two tickets to Guinness x Meatopia‘s Sunday Session.

Here’s some photos from an amazing day of beer, meat, sunshine and good times.  But mostly meat.

END_OF_DOCUMENT_TOKEN_TO_BE_REPLACED

The whole world is familiar with the black stuff, but there’s a chance you haven’t heard of Guinness’ Open Gate Brewery.  Based in Dublin at the same location as the Guinness Storehouse, the Open Gate is the Guinness brewers’ licence to be creative.

Although there’s been an experimental brewery at St. James’s Gate for over a hundred years, the Open Gate taproom only opened to the public in late 2015.  Most of the experimental beers are exclusively available in the taproom, although some of the most successful have made their way into bars, restaurants and off-licences across the UK including Citra IPA and Hop House 13.

We were really excited to have a chat with the General Manager of the Open Gate, Padraig Fox to discuss all things beer, food and the third annual Guinness x Meatopia which takes place at the Open Gate Brewery, 5th-7th July 2019.

END_OF_DOCUMENT_TOKEN_TO_BE_REPLACED

Most Northern Irish bars are tied to macro beer distributors, meaning there’s often limited space for independent beer taps. Guinness, although one of the biggest beers on the planet, is therefore often our default go-to.  Even though it would be impossible to claim Guinness is a craft beer by any definition, we’ve still got a lot of love for the black stuff, particularly compared to the lagers it usually sits beside at the bar.

END_OF_DOCUMENT_TOKEN_TO_BE_REPLACED

Kilkenny has a rich brewing history, most famously known as the home of Ireland’s oldest beer… no, not Guinness… Smithwick’s!  The Smithwick’s brewery was founded here in 1710 – acquired by Guinness in 1965, production finally ceased in Kilkenny in 2013.  The old brewery is now the home of the Smithwick’s Experience, a tourist attraction.

There’s more to beer in Kilkenny than Smithwick’s though – and as one of our favourite places in Ireland, we’ve listed the best beer spots below…

END_OF_DOCUMENT_TOKEN_TO_BE_REPLACED

On St. Patrick’s Day 2017, more than 13 million pints of Guinness were consumed worldwide.  We’re not Guinness haters here – when there’s no craft options, Guinness is always our go-to.  While Guinness is Ireland’s most well-known stout, there are lots of other brilliant stouts being brewed by craft breweries North and South so why not try one of the beers below this St. Patrick’s Day? END_OF_DOCUMENT_TOKEN_TO_BE_REPLACED 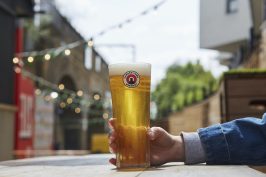 Craft & Slice
@craftandslice
RT @craftandslice: .@Ardbeg have just announced their first ever beer, The Shortie! It's a smoky porter (of course) in association with @Br…

RT @drinksmaven: I’m a BIG fan of @Ardbeg & heard about a potential collab with @BrewGoodr to make a smoky porter. Intrigued, I asked to tr…

.@Ardbeg have just announced their first ever beer, The Shortie! It's a smoky porter (of course) in association wit… https://t.co/qFRhAkmAjL