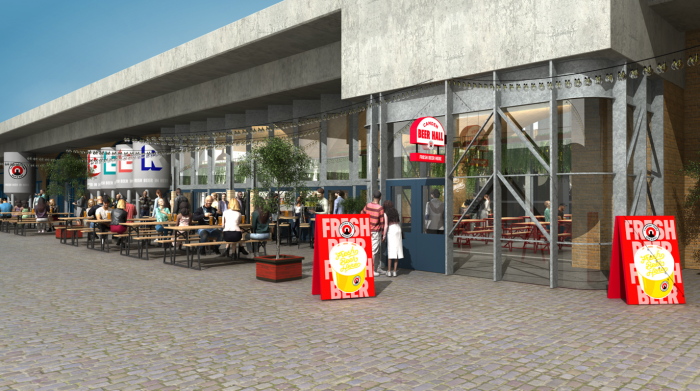 Launching in early June at the original Camden brewery site, the Camden Beer Hall doors will be open ready for you to celebrate the Summer with a pint in the sunshine.

Inspired by Bavarian beer halls Camden Town Brewery’s founder Jasper encountered on trips to Germany – which sparked the creation of their Hells Lager – the new Camden Beer Hall combines the never pasteurised beer you know and love, with all the innovation of their Camden brewery site to create a fresh beer drinking experience in London.

END_OF_DOCUMENT_TOKEN_TO_BE_REPLACED

After three long months of lockdown, Camden Town Brewery are excited to re-opening their gates for the Pop-Up Beer Garden from this Saturday, July 4th.

The Camden Pop-Up Beer Garden has been built to be sociable and at a distance, so pre-bookings are essential (no walk-ins) and online bookings are now possible through their website if you’d like to visit the brewery at Kentish Town West for some socially distanced open-air beers. END_OF_DOCUMENT_TOKEN_TO_BE_REPLACED

Ever wondered why beer and burgers taste so great together? Join bona-fide beer expert, Mark Dredge at Camden’s virtual pub, THE BRE.WWW.ERY BAR, to learn the science behind pairing beer and food.

END_OF_DOCUMENT_TOKEN_TO_BE_REPLACED

Two behemoths of the London beer and food scene are joining forces; Camden Town Brewery and Caravan will deliver a LIVE Beer Brunch cook-a-long at noon, today (4th April 2020) in a fundraiser for the hospitality industry, which you’re no doubt aware by now, has been hit badly by the coronavirus lockdown. END_OF_DOCUMENT_TOKEN_TO_BE_REPLACED

Camden Town Brewery have unveiled the world’s first pub for hedgehogs!  Well, sort of.  They’ve partnered up with the British Hedgehog Preservation Society to help hedgehogs hibernate during these cold winter months.

The change in their environment has seen animals such as hedgehogs arrive much later in the year, meaning they’re not able to eat enough to sleep through the cold winter months, and in urban areas, loss of habitat, dangerous roads and pesticide have all limited hedgehogs’ ability to find a safe space to hibernate.