On a recent episode of one of my favourite beer podcasts, Hopinions, the show focused on the concept of a fantasy pub crawl – they picked eight pubs or bars that they would visit in one trip if time and money was no obstacle. This got me thinking… I was struggling to limit myself to just eight as they did on their worldwide fantasy pub crawl.

I expanded my selection to ten whilst also limiting my drinking zone to the north of England. I think it makes my route somewhat plausible though it may take an overnight stay at some point.

For the sake of ‘fun’, let’s pretend all trains run on time.  Anyone who listens to the Beernomicon podcast will know how much they love Northern Rail, but hey, it’s a fantasy pub crawl.  Let’s also pretend that, as above, time and money are no object.

I’m based in Leeds, so that’s where we begin and my first stop of the day is…

Conveniently opening at 10am and located a stone’s throw from my bus stop, I’d pop into Little Leeds Beer House on my way to the train station for a third of something fresh and light and grab myself some of the freshest cans from the UK for my train.

The four taps always have a high quality pale ale on, the perfect start to a pub crawl, and the fridges are full of recent releases from the UK’s best juice merchants and some classic German lagers along with shelves full of any style you could hope for.

From here, it’s a quick walk to the railway station where I board the next train for Manchester…

Not far from Piccadilly station is Bundobust, purveyor of fine Indian street food, quality beer and big brother to the original Bundobust in Leeds.

Any good pub crawl needs sustenance and my weapon of choice here is a vada pav and okra fries.  The spicy, carb-tastic mashed potato burger is a perfect belly filler with the beautifully seasoned fries as a complement.

Cloudwater have moved their tap room a couple of times recently, due to lack of space at their old site, which saw them flit back and forth between their barrel store and the brewery. They’ve now expanded the brewery meaning they can bring their tap room back on site and it’s a venue that can’t be ignored.

There’s something incredibly calming about Unit 9 from the surreal, ambient soundtrack in the toilets to the pot plants in the middle of the tables.  The bar is brightly lit and decorated in predominantly white but never strays into feeling sterile.  You look out over brewing equipment and barrels below which only add to the feeling that you’re sharing this space with the brewers.

The taps are always full of the freshest Cloudwater juicy IPAs, sours, stouts with guest brewery showcases often juxtaposed to give a large variation.  All Cloudwater beers are the same price with the style and strength determining the size of the measure, with guest beers priced independently.

I think I’ll have a few here to make the most of my visit – the most recent big hitting DIPA, a stout and maybe a guest sour before I leave for the next train out of nearby Piccadilly heading to…

This was a tough decision for about two seconds but I had to include Buxton’s Brewery Tap, even though it’s a slow train there and back, just to visit this one excellent location in a sleepy little rural town of the same name.

Buxton to me scream consistency across all of their wide range and you’ll find plenty to choose from here including the likes of their famous Yellow Belly Sundae on tap, as is known to appear from time to time… temper this with one of their beautiful, low ABV pale ales like my personal favourite Myrcia and you’ll not be disappointed.

Check out their bottle list and you might be as lucky as I was to come home with an aged bottle of a gem like Tsar Bomba, a bretted stout.

I’m told their Sunday dinners are a thing of majesty, so keep your eye out for that if you’ve timed your trip right.  Don’t forget their tap room is open at the weekend to visit, so maybe pop along there to try the freshest possible beers and then head back to the nearby station as we head back east to… 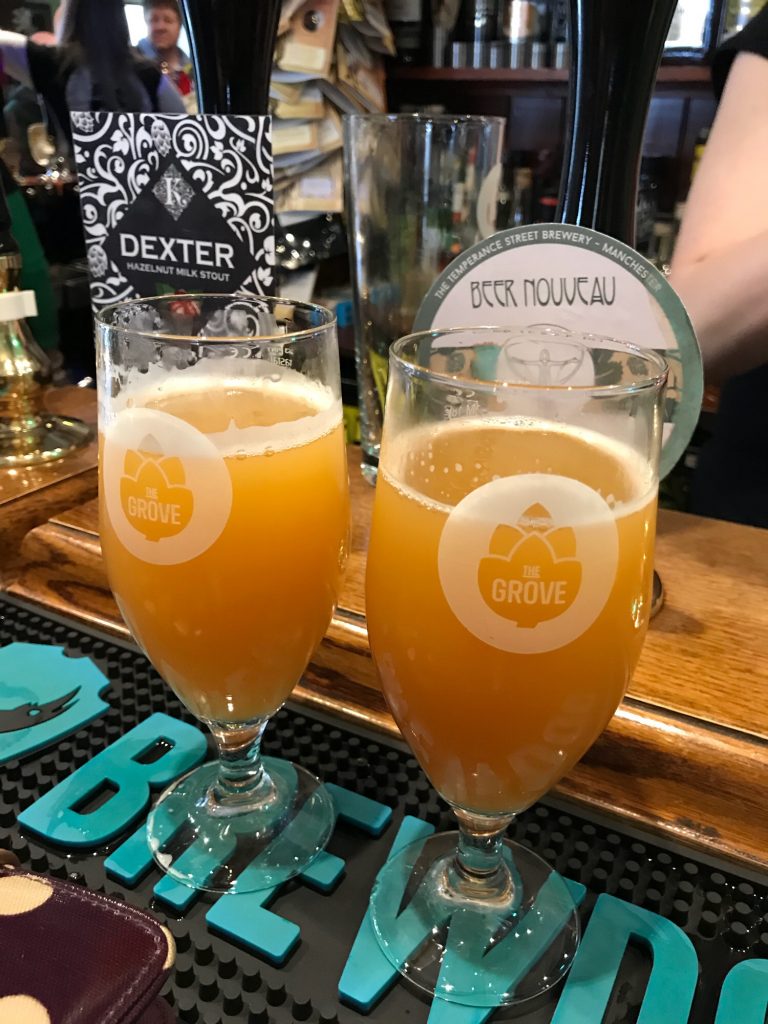 Making our way back towards Leeds, it would be criminal not to stop off in Huddersfield for a visit to the legendary Grove.

Inside this unassuming building is arguably the best pub in the UK, with something for everyone. A huge tap list of the latest and greatest in both cask and keg, and a famous bottle list which can be found chained to the wall.

The inside of the Grove is akin to the TARDIS with ample space to park yourself for a long stay in the company of welcoming locals and beer travellers alike.

I’m not a massive fan of cask beer, but if you are then that’s where you’ll want to start in the Grove.  I’d personally head straight for the bottle list and find myself a forgotten gem, or maybe something a little different from the always diverse keg set up.

You won’t struggle to find a plethora of options here, so settle in for a few drinks before turning your thoughts to heading home…

Oh dear, what an unfortunate turn of events – accidentally falling asleep on the train (admit it, you’ve done it) and missing my stop in Leeds and I’ve somehow ended up in Newcastle…

Sitting somewhere between a quaint local boozer and a dive bar, the Free Trade Inn is a Mecca in the north east for the newest keg releases, the best in local cask and a well-stocked fridge that will cater to those in search of something decadent.

Grab your beer of choice and step outside and sit at a table with a fantastic view across the Tyne.  No fog on my fantasy pub crawl, it’s sun splitting the stones.

If you’re hungry, you’ll often find fast food vendors outside supplying high quality wares so recharge and we’re moving on and heading back towards Leeds…

House of the Trembling Madness (48 Stonegate, York, YO1 8AS)

Seeing as I made it east of Leeds, I might as well capitalise and stop off in York on the way back.

House of the Trembling Madness is famous in the city of York for their tiny city centre bar with quirky architecture and taxidermy. But did you know they opened a much larger bar only a stone’s throw away which also houses a fantastic offy in the basement?

It takes the original bar’s style and expands it and feels more opulent.  There are two floors of beers to choose from, each with their own menu – so you’ve got a massive range of fantastic keg to choose from. And remember, that off licence downstairs sells everything to be consumed in the bar as well… your choice is in the hundreds.

The food here is not to be ignored – my personal favourite is chorizo cooked in cider, served with cheesy bread but you can get anything from an all day breakfast to a charcuterie board with great local produce.

At this point of the imaginary day, I think I’d be looking for something a little different and you can always count on Friends of Ham to be that place.

Just around the corner from the station, this bar always has a great selection of both cask and keg, and some unexpected choices on offer; they have what seems to be a permanent Alvinne line on recently.

With their new basement bar, Underbelly, opening any day now – specialising in spontaneously fermented beer – you’re sure to find something a little wild and special here.  I’m having a Tuverbol from the fridge, please.

If it was breakfast I’d indulge in their amazing poached egg, n’duja sausage and smashed avocado on sourdough bread but it’s late in my fantasy pub crawl so it’s time for a cheese board and some sumptuous meats.  And then we cross the street, down the stairs and off to…

Serving a large selection of their own beers, guest beers and even cocktails on tap, North Brewing Co’s city tap will have something to quench everyone’s thirst.

There’s ample seating inside and out, but this is a very busy spot which only goes to enhance the rapidly growing reputation of North as both a brewery and a drinking location.  One of the great quirks of this bar is their early opening – you can grab yourself a breakfast bao and a coffee from the wee hours of the morning.

North have been brewing some fantastic IPAs recently with some great collaborations with some of the behemoths of the juice game but if I’m at a North location I’m drinking a Triple Fruited Gose.  If I’m hungry, it’s the spiciest bao they have on the menu, thank you very much.

The final stop is the most recent addition to the scene as we stop off in Brownhill & Co, the younger yet bigger brother of Little Leeds where we started the day.

A perfect finish to the day with table service so you can rest those weary legs and treat yourself to some of the best beers you’ll find in Leeds.

An ever changing keg list with juicy IPAs, traditional Belgian styles, bold stouts and one dedicated cask line should keep everyone satisfied but if you feel like really treating yourself, grab something special from the fridge – recently it’s been inhabited by the likes of Side Project, Mills, 3 Fonteinen and Cantillon – big hitting beers for a bar that’s already a heavyweight on the local scene.  Plus, they sell Synder’s pretzel pieces, the ultimate beer snack.

There are many bars that could and would make this list on a different day. Looking back, I could have also included Café Beermoth, 57 Thomas Street or Northern Monk’s bar in Manchester (pictured in the featured image at the top of the article!)

I didn’t even make it to Sheffield which would have some superb additions but it’s basically the midlands anyway… I didn’t include any Brewdog bars either because I think everyone knows about those by now.

In Newcastle, By The River was incredibly close to being included but as that was an impromptu stop, it just missed the cut.

What’s for sure is that the North of England is blessed with a wide range of fantastic bars which are the public face of a vibrant and friendly beer scene.  Long may it continue and I hope I’ve brought at least one or two new bars to your radar for your next trip oop north!