All posts by
Michael Wilson

Based in Houston, Texas, Karbach Brewing Co have always been deeply invested in giving back to their local community – it’s been a part of the brewery’s DNA since being founded in 2011.

END_OF_DOCUMENT_TOKEN_TO_BE_REPLACED

For this week’s #4pmWithBeavertown, grab your pens, paper and guerrilla spirit and join Beavertown at 4pm for a crafter-noon with artist Lu Williams of queer zine collective, GRRRL Zine Fair. This week – if you’re keen – it’s time to make your very own zine!

No idea what a zine is?  Don’t worry, Lu will be on Beavertown’s Instagram Live teaching you what a zine is, including how to make one, how to self-publish your own work and all about DIY culture.  The session will be accompanied by a freshly opened beer, of course – and there will be a Q&A session at the end for any quaran-zine related queries.

Here’s what you’ll need: paper (A4 or A3 is best); glue, tape, or anything sticky; something to draw or write with; scissors; old newspapers or magazines to cut up.  END_OF_DOCUMENT_TOKEN_TO_BE_REPLACED

The brewery’s new Imperial Stout – Eddie Fights Judge Doom – is the first of its beers to be launched via the secure contact-free ordering and delivery service. END_OF_DOCUMENT_TOKEN_TO_BE_REPLACED

Wanna be a brewer? As part of Beavertown‘s ongoing weekly live events, this week’s #4pmWithBeavertown invites beer fans to a Meet the Brewer-style virtual discussion on the different pathways that can lead to working in beer.

This is a chance to get up close and personal with the makers of Beavertown’s finest pale ales, including Head of Beavertown’s Tempus Project barrel-ageing programme, Charlotte Freeston.

The talk will be conducted from their own homemade pub, which gained popularity on Twitter after some of the Beavertown team decided to recreate their favourite pastime at home during Lockdown. END_OF_DOCUMENT_TOKEN_TO_BE_REPLACED 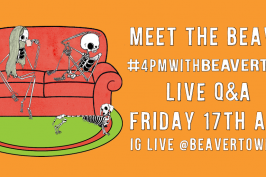 Craft & Slice
@craftandslice
RT @wylambrewery: YOU CAN HAVE YOUR CAKE & EAT IT 😉Our Tap Room Cafe is participating in the #EatOutHelpOut scheme.. This means on Mon-We…

RT @BrewDogJames: At the end of March, I honesty did not know if @BrewDog would survive.However, despite 101 of our bars being closed &…

RT @callmelamb: So. I have been made redundant. Anyone have any beer jobs going or know of any, please please let me know. It’s awful, b…